Will Disney's ownership of Star Wars cause fans to "Let it Go"?

At SmartyStreets May 4th is a pretty crucial holiday for us, and we're cautiously optimistic about what the Disney future holds.
May 4, 2015 (subscribe)

Here at SmartyStreets, we enjoy our geekery. All of us indulge in pop culture to some degree, and while we all enjoy different flavors of said pop culture, there’s at least one we all agree on without question:

Star Wars. And that means that May 4th is a pretty crucial holiday for us. Hopefully all of you are celebrating in some way. We celebrated by buying tickets to go see Avengers: Age of Ultron together as an office. It’s another Disney property…and it’s part of the reason this article was written.

Only a few geek pop culture items have bubbled close enough to the surface of society that they could by widely accepted. And Star Wars is one of them. That’s because, as kids, we all did it. Who didn’t spend an inordinate number of hours playing with sticks we pretended could glow in the dark? Who wasn’t trying to use Jedi mind tricks to convince mom and dad that, in fact, no cookies had been stolen from the cookie jar? It wasn’t just our childhood. It was everyone’s. Everyone wanted to fly starships, tell people they were looking for different droids, and warn people “it’s dangerous to go alone. Take the force with you.”

They may have worded that last one different in the movies.

The point is, while our parents and other adults saw us doing this, we saw ourselves doing this. Some of us have never really let go of that dream, and frankly, can we blame them? Have any of us really given up that dream? Is it really that bad to say we want to crawl back into that glorious sandbox and play?

Well now thanks to Disney, we will have that chance again; and at least for those of us here at SmartyStreets, we’re tentatively excited. We want this next movie to be worth it. Yeah, that does mean we want to want to give someone our money. Just like those bruises we got on our hands as kids, we’re willing to pay the price–as long as it’s worth the price. We want to play in this world. We know it will never be as real as this, but as long as there is something to love about Star Wars, we are going to keep trying. That’s why there’s so much riding on this next movie.

Then there’s another problem. Once we’ve seen this next film–and if it’s good–we’re going to trust Disney to handle the Star Wars properties in further developments. But, and here’s the problem, Disney has the power to use that trust to throw pieces of Star Wars into their intellectual-property-mixing-bowl with other pieces. Should we be scared of the possibility of Disney blending properties together? Even if potential crossovers aren’t canon? Honestly, what are we to expect will come from this? 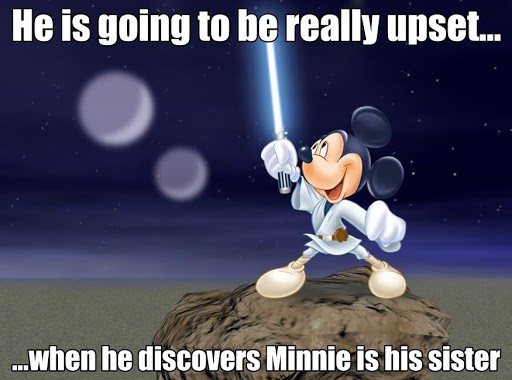 Let’s start with the fact that Disney owns more than just Lucasarts. 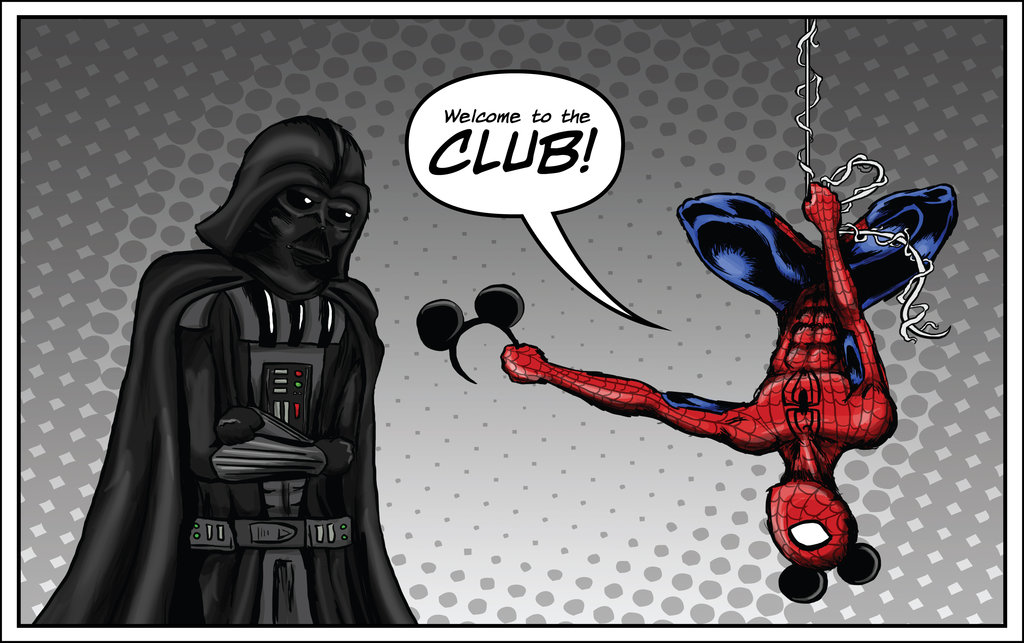 It’s no secret that they’ve slowly been buying up the world like someone playing Risk marching inch-by-inch into Asia. At this very moment, about half of all our base are belong to them, roughly speaking (Insert Infographic). Certainly in Hollywood, Disney is one of the foremost–if not the biggest–of the heavy hitters. Just Avengers and Frozen alone have brought in almost $3,000,000,000. What they are doing is obviously bringing in a lot of money, so if we’re using that as a yardstick then we can trust that their work with Star Wars will likewise bring in plenty of cash.

Then again, the prequels brought in a lot of revenue as well. Take that as you will.

Beyond movies, Disney has also used its new properties in other formats: it currently runs three Marvel cartoons (Ultimate Spider-man, Avengers Assemble, Hulk and the Agents of S.M.A.S.H.), as well as a Star Wars cartoon (Star Wars Rebels). They’ve run two crossovers with Disney properties, though they’re not as presumptuous as the example from above. However they did do this… 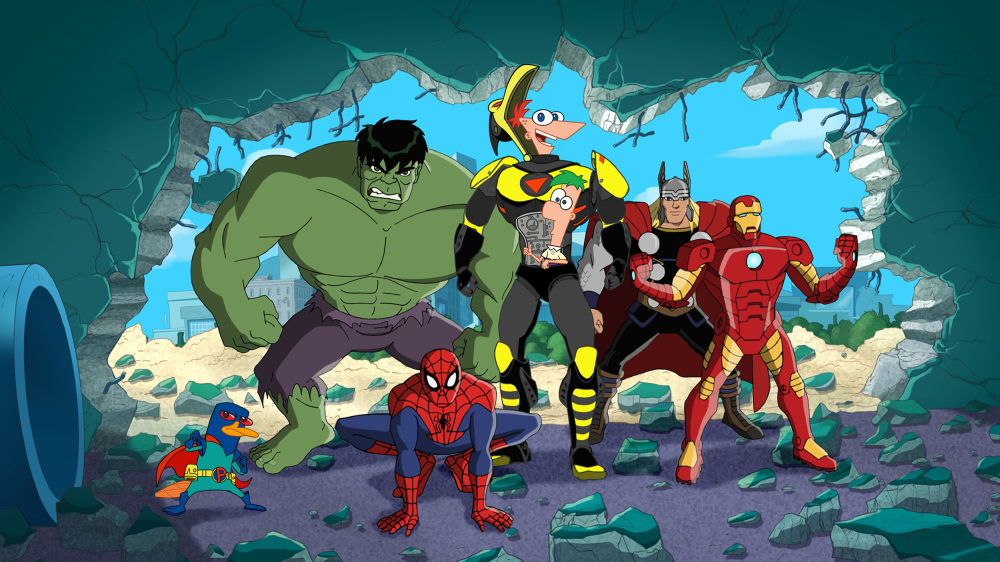 They decided to make several comic series then, wondering how to print them, looked around and said “Hey, look at that! A conveniently placed comic publisher”. And so far, everyone but the Star Wars crew is kickin’ the ol’ pigskin around in Disney Infinity. For the most part, they’ve kept each part of their TV dinner in their respective sections, with only occasional spillover. Even so, with Disney owning all these properties, and with the interactions that they’ve had (minimal as it is), it’s hard not to imagine 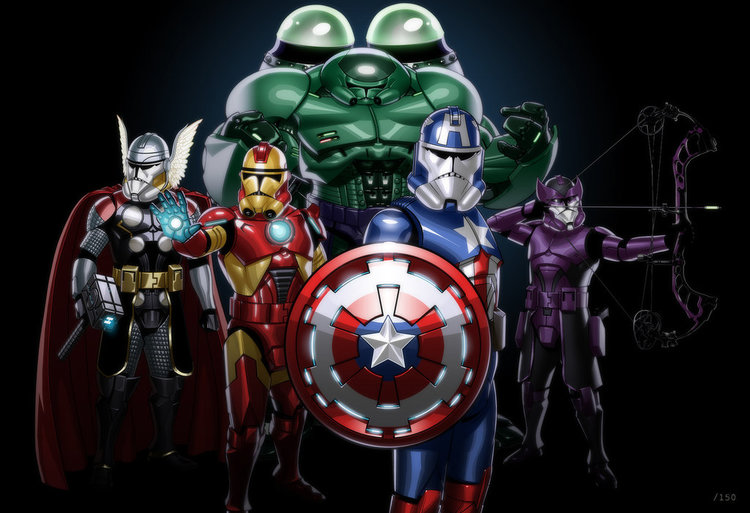 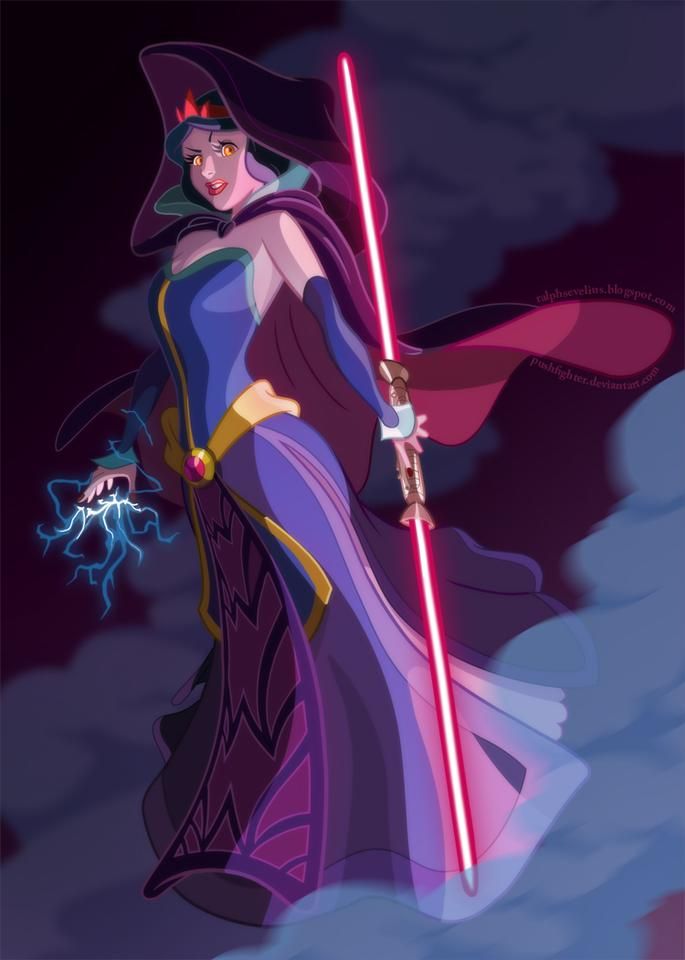 Both for the new movies, and the potential mingling of properties, the question at the heart of things is, “should we be scared”? The movies are certainly a safer bet, but who’s to say that there won’t be a what-if property, a la DC vs. Marvel? And really, do we need to be scared? Or can we sit back and enjoy the idea of Thor fighting Luke, lightsaber to Mjolnir? Who better to take the throne of the Emperor than Dr. Doom? And couldn’t Leia teach the other Disney princesses a thing or two about taking charge and fighting for what they want?

Perhaps we should say it this way: with the controversy of the previous three movies still in our minds, we look forward to the new movies–and any other new properties–with tentative excitement.

And of course, hope you’re celebratin’.