In part 2 of this 2 part series, the women in code at Smarty discuss initiatives for increasing opportunities in school, groups, and influencing future generations.
Subscribe Now
May 3, 2022
by Anne Arnold 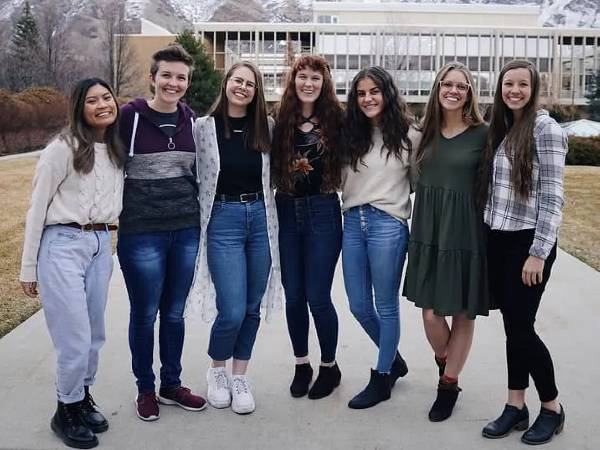 Anne: Several of you are involved as Diversity and Equity Mentors for the Computer Science Department at BYU (Brigham Young University), can you tell us a bit about that?

Savannah: I’m the lead mentor for the Inclusion, Diversity and Equity Mentors at BYU and it’s really awesome. We used to be called the Women’s Initiative’s Mentors, so we focus primarily on women because it is the largest minority group in computer science. But when COVID-19 hit, we broadened our initiatives to include our LGBTQ+ and international students. We do a lot of event planning and peer mentoring. We help minority students plan class schedules, find research labs, gain internships—you name it. We’re kind of the catch-all for underrepresented CS students, but we’re really there to help people find and make support groups.

Jenny: Savannah and I were part of the pilot semester, where they first explored having that office and it was really cool. The most important thing the mentors do is just help people realize they’re not alone and they’re not the only one who feels like they’re having a hard time in their classes. I know I felt that way. But then I started talking to people and I realized that everybody feels like they aren’t doing enough or that they don’t know enough, and I wasn’t as scared of those feelings. That’s the goal of the mentors—to help everybody just realize they’re normal for feeling like it’s hard, and we can all work on it together and it will be okay.

Shaylee: When I joined, they had already been going for a year, so I got to reap the benefits of the pilot program, and it made a huge difference. The CS program is very male dominated, so the only activities tended to be pizza parties. But we organized an activity where all the ladies got together to do watercolor painting, and it was so cool to be in a room with 30 women. I hadn’t realized there were that many of us in the program. It was really awesome to have that community and support and know that we were all going through the same thing.

Anne: What suggestions would you have for those who aren't part of an organized group but still want to further a mission of creating opportunities in software development?

Raya: I think the best thing to do is to join a coding club or organization. Clubs are a really good way to get started initially. Just talking to people about it is one of the best ways to get involved.

Kiersten: I think we just need to get out and talk about it more. As programmers, we tend to be introverted and we may think “nobody else wants to hear about it.” But there are people who find it interesting. We shouldn’t shy away from things like career days. There are always the firefighters, and things like that, but I think we should get more software engineers out there too. We need to find fun ways to present it so it’s more top of mind as a career.

Cami: Yeah, like what you said, I think we need to just increase the visibility in whatever way you can. There’s more to developers than the stereotype. They can be anyone—a girl who likes pink and frilly things, or a girl that doesn’t. It can be all types of people. It’s not just the stereotypical guy sitting at the desk with glasses and greasy hair.

Jenny: …living in his parents basement.

Anne: How has your experience and being a developer shaped your efforts in helping others feel like development is for everyone?

Kiersten: Sometimes I think, “If I can do it, anyone can do it.” It’s not like a music major, where if you haven’t been doing it for ten years already, then there’s no hope of majoring in it. You can literally start from zero and learn what you need to learn and quickly be productive.

Raya: I’m a huge advocate now of the idea that “if I can develop, anyone can develop.” My mind does not work the same way that most developer’s minds do. But I find it surprisingly intuitive. And I think that lots of people will find aspects of computer science that kind of vibe with them. So I’m a huge advocate for encouraging people to go into computer science regardless of what they think their initial skill set is.

Shaylee: Anyone can do it. As I’ve gotten to know more and more developers, I’ve realized that there’s just such a variety of people that go into development. We have different talents and interests. So, I don’t think it’s just for one type of person because there’s so many different people that are already in it. And we could have so many more.

Anne: Do you think there are a lot of individuals who are missing out on a career in developing just because they don't feel like it's 100% for them?

Raya: I think this is especially true for women. Lots of girls don’t even take computer science classes because they may think “that’s just a dude’s major,” or “it’s more of a mathy thing.” I think lots of people don’t even know they’ll enjoy it, because they already have a stereotype or some kind of prejudice in their head. I think it’s hurtful to not try new things, even if you think you’re not going to be good at it at first.

Jenny: Part of the reason BYU started the mentoring program is because they were seeing a lot of people in general, but especially women, drop out after the first couple of classes. They were feeling alone—feeling like there’s no one like them or they don’t fit in. It’s just hard to get over the learning curve if you don’t have a tribe or support group.

Shaylee: There’s a lot of people that don’t even think about it as an option and never have any exposure to it. So they would never go into it.

Anne: What would you want your “pre-coding” self to know about coding and development?

Savannah: It is worth it. Just stick it out. It will be worth it in the end.

Caroline: I think it’s really interesting to hear all of your responses—sometimes being a programmer is hard because of the feeling like you need to know everything. No matter how talented you are, you won’t know everything. I’ve been doing social media for the mentoring group at BYU, and I get to research a lot of different programmers throughout history—women programmers, African-American programmers, and other underrepresented groups. And there’s just this theme of resilience.

Those feelings of loneliness can really settle in when you get into a class and you’re the only woman, or you’re the only international student. But studying all of these backgrounds and hearing your comments is just a testament that people who end up in technology are resilient. I remember reading about [Katherine Johnson], one of the first African-Americacn Women scientists at NASA. There was a lot of sexism and racist comments, and she just ignored them. She knew she was capable and she demanded respect.

So it’s really cool to hear you say it's really hard, but I stuck through it and it’s such a good skill to learn.